Importance of Dairy to Oregon

The fact that milk is Oregon’s official state beverage shows how important dairy cattle are to its agriculture and economy. Oregon is home to 240 dairy farms, and its dairy cattle industry contributes nearly $1 billion to the economy every year! Oregon dairy farmers are devoted to producing high-quality milk by taking good care of their cows. Their hard work pays off, as Oregon has consistently placed in the top five states for milk quality. In 2020 alone, milk production made $557 million in gross farm sales, making it one of Oregon’s most valuable commodities.1

Cattle were domesticated over 10,000 years ago in the Near East. However, it took over 4,000 years for people to begin milking cows. The first evidence of cows being milked for human consumption has been found in pottery shards in Britain and Northern Europe. But first, humans had to evolve to drink cow’s milk past infancy. Since then, cows and cow milk has been found in almost every major civilization, and have even been worshiped by ancient cultures. In Ancient Egypt, the goddess Hathor was a cow, and she guarded the fertility of the land. 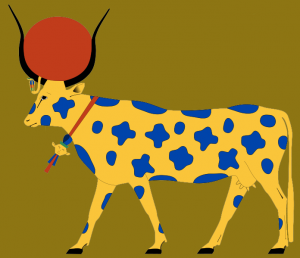 Cattle were brought to the New World via Mexico in 1525 and arrived in New England a century later. Milk and milk products quickly became a staple in the diet of the colonists in the Americas. In the late 19th century Louis Pasteur invented pasteurization, which is the process of heating up liquids to kill harmful bacteria and then cooling down quickly. Milk bottles were patented in 1884, and became the standard just five years later. Pasteurization and the milk bottle vastly reduce the potential of milk-borne illnesses. The square paper milk cartons were introduced in the 1950s, and they were quickly adopted by most dairies because they could hold more milk than glass bottles, and the cost of milk for consumers was also reduced because the paper cartons were cheaper than the glass counterparts.

The best thing to happen to the dairy industry was the invention of the automatic milking machine. There were many prototypes created before one was found to work in 1892. By the 1920s, machine milking became a common practice, and today almost every dairy farm milks by machine.

There are numerous dairy breeds of cattle raised in the United States. There are six main dairy breeds. Farmers choose which breeds they have depending on what type of dairy products they want, like drinking milk, or milk for cream or cheese.Some common breeds found in Oregon include:

Dairy products are vital in building and maintaining strong, healthy bones. Important nutrients like calcium, potassium, vitamin D, and protein are found in dairy. Along with contributing to improved bone health, dairy products also reduce the risk of cardiovascular disease, type 2 diabetes, and high blood pressure. Depending on age, having 2-3 cups of dairy every day is recommended as part of a healthy diet. See the chart below to discover how much dairy you should have in your diet! 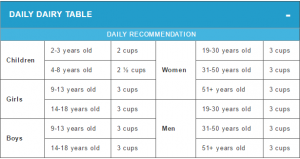 Milk comes from dairy cows after they give birth to a calf. Cows are milked two to three times a day, and some breeds can give up to nine gallons per day! The milk is immediately pumped into storage tanks where it is cooled to keep it safe and tested to make sure it doesn’t have any bacteria or other bad stuff in it. It is then put into a milk truck, where it is taken to a processing plant to be pasteurized and bottled if it is going to the store as regular milk. This is a very fast process, normally two days, to make sure people are getting the best, freshest milk possible!The are other uses for milk, too, like butter, cream, cheese, yogurt, ice cream! Find out how these yummy milk products are made below.

Fresh milk from dairy farms is collected and brought to the creamery. The cream is then separated from the fresh whole milk using centrifugal force. It is then pasteurized and the cream is beaten vigorously in a churning cylinder until it thickens naturally into butter. The remaining liquid (buttermilk) is drained off, and the butter is mixed and blended. At this point, salt is sometimes added. It is then packaged and sent off to the grocery store!

The production of cream varies slightly between the different types of cream; however, the production of most involves the separation of fat from milk which is done through centrifugation, which involves the rotation of milk at high speed by an electric motor; the force of this process causes the milk-fat globules to separate from the denser liquid. This process is continued until a cream of the desired fat content is produced. The cream is then pasteurized and ready for you to enjoy!

There are so many different types of cheese, but they all belong to one of two categories: hard cheese and soft cheese.

The milk is first pasteurized. Starter cultures of special bacteria are then added to the milk and their growth “ripens” the milk and helps to develop the desired flavors and aromas. Rennet is then added to the milk which helps it to coagulate and turn into curds and whey. The curds and whey are then heated to a high temperature and salt is added to produce the correct texture and flavor. The cheese is then pressed to force out the whey, and to give it its final shape. The cheese is then left to mature and the longer the cheese is left in storage the more mature the flavor becomes.

There are two types of soft cheese: ripened and fresh. Soft cheeses are made from heat treated milk which is fermented by the use of specific bacteria. Rennet is sometimes used to produce a firmer texture. Fresh cheeses are ready for use as soon as the manufacturing process is complete but ripened cheeses are allowed to mature in temperature and humidity controlled rooms for up to one month.

Yogurt is produced through the fermentation of milk by lactic acid bacteria. The milk is first pasteurized, homogenized and is then cooled to allow the addition of bacteria or starter culture. Given the right conditions, the bacteria are able to ferment the lactose, producing lactic acid. The milk proteins then coagulate and set, to form yogurt. A colorless liquid called acetaldehyde is also produced during fermentation and gives yogurt its distinct flavor. All kinds of flavors can be added at this point before it hits the grocery store.

In its most basic form, ice cream is a mixture of cream and/or milk, sugar and sometimes eggs that is frozen while being churned to create a frozen product. In commercial ice-cream making, stabilizers are usually added and the mixture is pasteurized and homogenized. The mixture may have flavorings added, from something as simple as vanilla to fruit or other flavors and pieces of candy. The mixture is then frozen in special machines that agitate it, using paddles or dashers, combining air to keep the ice crystals small and freeze it at the perfect rate to create a smooth, creamy-textured ice cream. Next stop, the grocery store!

the natural fat found in milk and milk products

a machine applies force to a liquid spinning it from the center, out to separate lighter liquid from the heavier liquids

when milk is quickly turned to make butter

liquid changes into a semisolid or a solid state

the chemical breakdown of a substance by bacteria, yeasts, or other microorganisms

the Ancient Egyptian goddess of fertility of the land, often depicted as a cow

the sugar found in milk