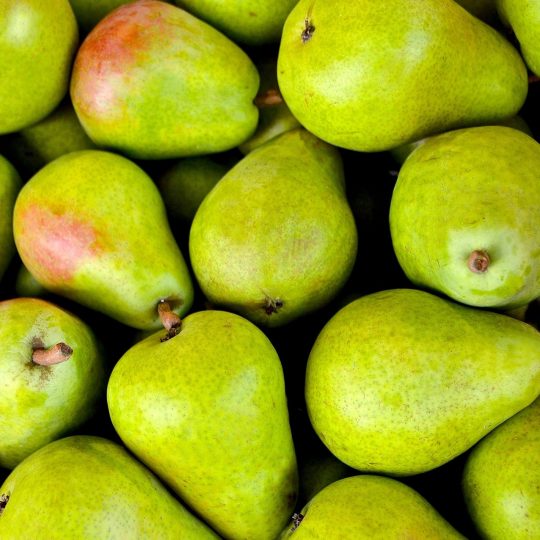 Importance of Pears to Oregon

Oregon is ranked number two in United States pear production. The only state that grows more is Washington. Oregon grew 32% of the country’s pear in 2020. That was 210,000 tons. That’s 420 million pounds! All those pears were worth over 97 million dollars. It was Oregon’s 14th most valuable crop. There are 967 farms in Oregon growing pears on close to 14,000 acres. Most of those pears are grown in Hood River County and Jackson County.1

A pioneer named Henderson Luelling brought pears to Oregon. He and his family came out on the Oregon Trail in 1847. Henderson packed pears and other fruit trees all the way from Iowa. Keeping them safe all the way across the Plains.

Joseph H. Stewart is credited with being the father of the southern Oregon pear industry. He was a nurseryman from Illinois. He started his orchard in 1885. The industry has grown a lot since then with some famous names, like Harry and David’s.

Hood River has been a main fruit growing area of Oregon since 1854. Apples and strawberries were the main fruits grown in the beginning. In 1919 a freeze that was 27 degrees below zero destroyed those crops. Many farmers chose to replace those crops with frost resistant pear trees.2

Pears are very similar, but there are differences between varieties. Some are sweet and juicy, others are crisp. Some pears need other varieties to help them pollinate. By planting multiple varieties, farmers are able to meet different needs. 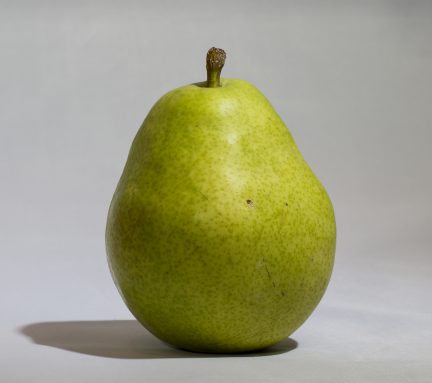 Anjou pears have a recognizable egg shape. There are red and green Anjou pears. They are the same, other than their color. This variety originated in Belgium and is named after a region of France. They are sweet and juicy and good to be eaten fresh or cooked. Anjous are harvested beginning in the fall and they can usually be found in grocery stores through the next summer. The red Anjou pears started as bud sports that grew on green Anjou pear trees. These are random and spontaneous transformations of the crop. 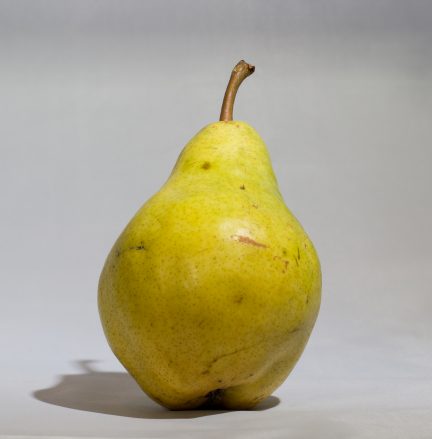 Bartlett pears are soft, juicy, and sweet. They ripen more after they have been harvested. They are green in the grocery store and will become more yellow as they ripen. Bartlett pears are often canned and preserved but are also good raw. They are one of the earliest ripening pear varieties. Harvest usually starts in August. There are red and green Bartlett pears. The red ones were also a bud sport from the green variety. 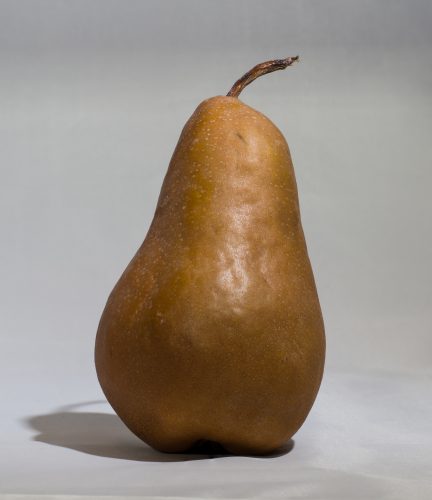 Bosc pears are a cinnamon brown color. They are a crisp pear and less sweet than a Bartlett. Unlike some pears, Bosc are sweet before they soften. They are good for baking because they are firmer than other varieties. Bosc pears were discovered in the early 1800s in Belgium or France. The first Bosc trees were planted in the United States in 1832 or 1833 and grew fruit in 1836. 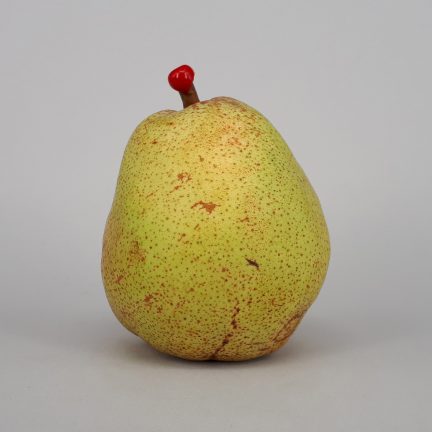 Comice pears are one of the sweetest varieties grown in Oregon. They are rounder and larger than most pears and often found in pear gift boxes. They pair well with cheese because they are so sweet. Comice pears were discovered in France in the mid 1800s. A red variety came from a bud sport in Medford in 1960.3

Life Cycle of a Pear

New pear orchards are planted in the early spring. Like other fruit trees, grafted trees are used instead of planting seeds. This means that the rootstock of a tree was paired with the scion of another tree. Some pear varieties are self-fruitful, but cross-pollination will lead to more pears grown on each tree. Pollinizer varieties need to be planted.

Each winter the pear trees go dormant and rest. This is a time when farmworkers will prune pear trees. They will remove extra branches and twigs the tree doesn’t need.

Pear trees bloom in the spring and the flowers have to be pollinated by bees.  Pears don’t make very much nectar and don’t attract bees very well. Farmers use twice as many bees to get the job done. The bees will fly to pear blooms to collect nectar and will also collect pollen. They will then take that pollen to another flower and it will be pollinated.

Once a bloom is pollinated, the parts of the flower will grow into fruit. They will ripen until late summer or fall.4 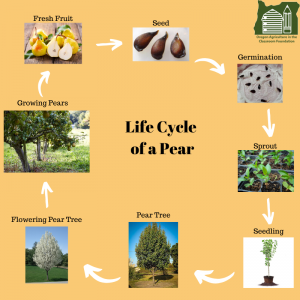 Some pears are stored for 6-8 months between harvest and reaching a grocery store. This means they must be harvested at the right time to make sure they stay fresh during those months.

Pears are harvested by hand and have to be treated carefully. They have soft skin and can be broken or bruised. Farm workers carry bags or baskets and pick each ripe pear off the tree. The pears they pick get taken to a storage facility or go to market.5

There are many diseases and insect pests that can cause damage to pear trees. Some of them have been dealt with for many years and others are new. Farmers work to prevent the damage in the best ways they can. 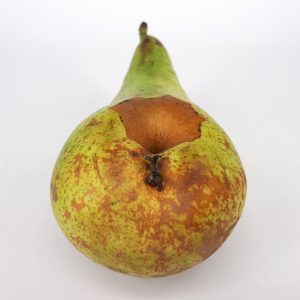 Pear scab has been a problem in Oregon since 1932. The disease is found almost anywhere in the world where pears are grown. It is caused by a fungus that infects young twigs, fruit, and leaves. This disease looks like dark brown to black spots on the fruit. The spots look velvety. They begin to look dry and cracked after time. The disease can live on dead leaves in the orchard through the winter. Spores are released during spring and spread the fungus.6 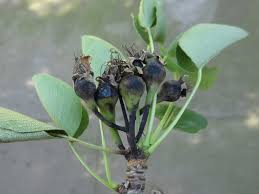 Fire blight is a very serious disease that can kill trees if infections don’t get taken off. The disease infects all parts of the tree. Flowers and fruit can wilt and die. Fire blight can spend the winter in orchards just like many other diseases. Warm and wet weather in the spring can make it spread through the orchard. Farmers work to prevent the disease with different products. Removing limbs that are infected also helps.7

Pear psylla has been a problem in Pacific Northwest pears since the 1930s. It is an insect that can damage trees if there are too many of them. They can cause the tree to lose leaves, grow poorly, or even die. Toxic saliva enters the tree from feeding insects and can shock the tree into losing leaves or dropping fruit. Pear psylla also create honeydew as they feed. It drips onto the fruit and loses its quality.8

Leafrollers are insects that cause damage to pear trees in multiple ways. If they feed on trees before bloom, it can prevent pears from growing or scar the fruit. They are named leafrollers because they roll leaves and tie them together to create a shelter. Farmers can try to control them through hand thinning the fruit or with various chemicals.9

Spontaneous, naturally occurring transformations that crop up on trees.

Pollen from one variety going to a different variety of the same type of tree.

Connecting two different plants together to form one plant.

A tree variety that makes pollen to pollinate other trees in the orchard.

Cut off and remove branches and twigs.

The root system of a plant that is grafted to the upper section of a different plant.

The upper portion of a grafted plant with the leaves and buds to grow.

A tree that can pollinate itself and doesn’t need pollen from another variety.

A tiny reproductive body made up of one or more cells, produced by certain animals and plants.

A type of plant that differs in characteristics from plants closely related.

Pears are both tasty and nutritious. They are a good source of fiber and vitamin C. They can be eaten raw as a snack or baked into desserts or other foods. Pears make a great addition to salads and pair well with cheese. They are popular for home canning and preserving.