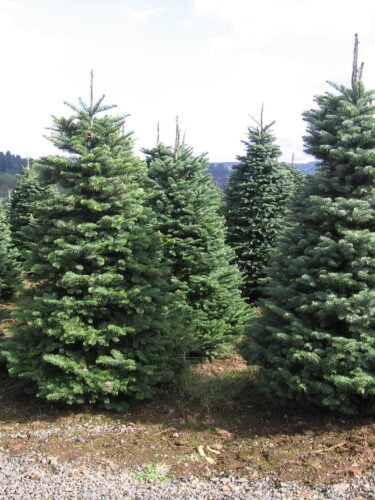 Importance of Christmas Trees to Oregon

Oregon grows more Christmas trees than any other state in the country. It is 31% of the United States’ Christmas trees. There are more than 1,000 farms that grow the trees. Oregon sold over 4.5 million trees in 2017. Oregon grown Christmas trees were worth 107 million dollars in 2020. The counties that grow the most are Benton, Clackamas, Marion, Polk, Yamhill, and Linn. They are all on the western side of the state.1 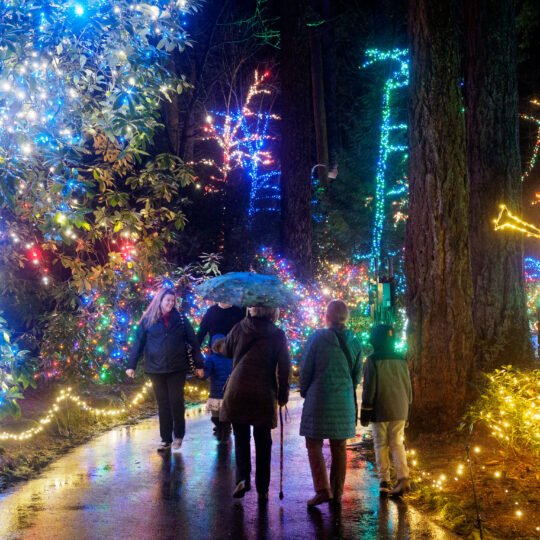 The first decorated Christmas tree can be traced back to 1510 in Riga, Latvia. Evergreen trees have been used for thousands of years to celebrate winter festivals. Small candles were added in the 17th century and electric lights became popular in 1890. Live Christmas trees have been commercially sold in the US since 1850. The White House has a National Christmas Tree each year.2

Douglas-fir have been the top choice Christmas tree in the United States since the 1920s (but they aren’t the most popular tree in Oregon). The needles on a Douglas-fir stick out in all directions from the branch. They are a dark green to blue-green color and are soft. The needles have a sweet smell when they are crushed.

Noble fir is the most popular Christmas tree in Oregon. Their branches are evenly spaced and good for hanging ornaments. Noble fir needles look almost silver or grey-green. Another reason people like them is that they keep fresh for a long time. Their needles stay on better than some other species.

Grand firs are native to Northern California and the Pacific Northwest. They are large trees and can be up to 230 feet tall. But that is if they aren’t grown to be Christmas trees. Their needles are thick, shiny, and a dark yellow-green color. They have a strong Christmas smell.

Nordmann fir also keep their needles very well after the trees have been cut. The needles are soft and pretty. These trees have become popular because they don’t have a strong smell. This means that people who have allergies or sensitive noses can enjoy Nordmann firs.4 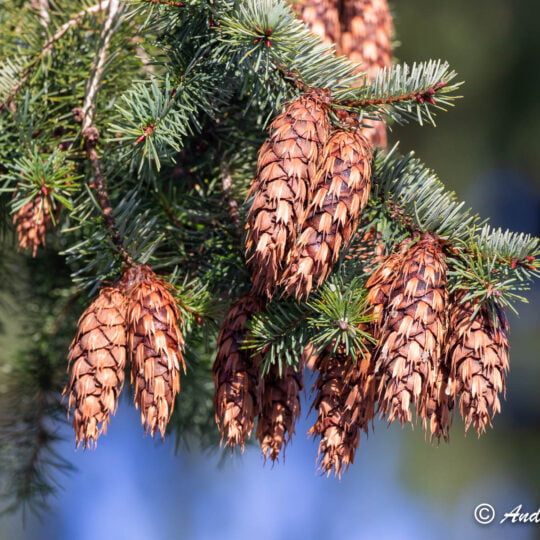 Life Cycle of a Christmas Tree

The trees are mostly left alone during the first couple years of growth. Some farms will use fertilizer and pest control during that time. Some will not. Each year, starting at about 3, crews go through the trees with machetes or clippers and shear the tree. This means they are trimming the branches to help the tree be the cone shape we are used to.

Prep for harvest can begin in the summer. Some farmers will go through the trees and put a tag on the ones they want to harvest that year. They will choose trees that are healthy, shaped well, and meet the size requirements they need to fulfill. Christmas trees are usually 6-10 years old when they are harvested. Harvest will begin in early to mid-November. This is so Christmas trees can be in tree lots by Thanksgiving. Crews go through the trees and use a chainsaw to cut down the ones with tags. Sometimes they are taken out of the field with trucks, but other times the trees are lifted and flown by helicopter. The helicopters can get to places that trucks sometimes cannot. And they move trees much more quickly.

Some farmers let people go to the farm and cut their own Christmas trees. This is usually called U-Cut.

Trees are shaken after harvest to remove loose needles and other unwanted material. Sometimes they are put through a baler and wrapped in netting to keep them compact and safe on the way to the lot. They are also tagged to indicate their height. After that, trucks will come to take the trees to their final destination where they will be picked out and taken home for Christmas.

There are a number of pests and diseases that can damage Christmas trees. Environmental stress and weather can make these things worse at times. Farmers do their best to prevent pests and diseases from causing harm. Sometimes that means using an insecticide to kill or prevent bugs. Farmers can also change which species of trees are planted to help control and destroy some of the different types of fungus that some trees get and others don’t. 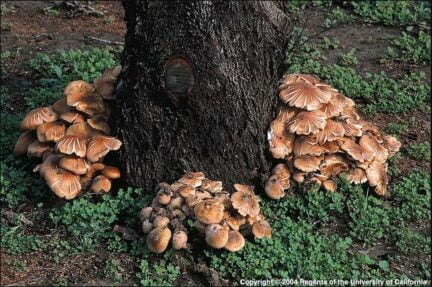 Armillaria root rot can severely damage Grand fir and Douglas fir trees. This fungus can live in the soil and infect tree roots. The disease can cause the needles to turn yellow, cones to drop from the trees, and the trees to die. Armillaria root rot is common in low-quality seedlings and stressed trees.6 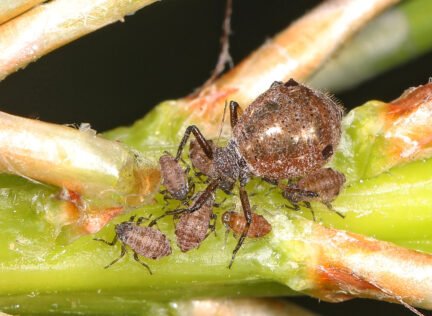 Conifer aphids use their piercing-sucking mouths to damage Christmas trees. They feed on all parts of the tree, including trunks and roots, and branches and twigs. They leave a sticky material behind as they feed. The material is called honeydew. Other insects feed on the honeydew. Sooty mold can grow on the honeydew as well.7 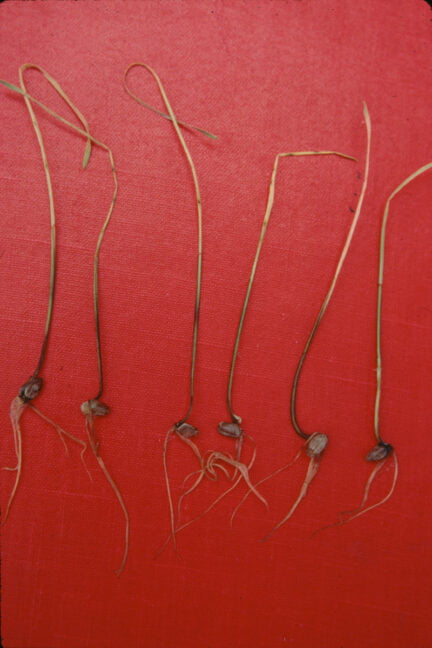 Damping-off is a disease that can happen in Christmas tree seedlings. It is caused by fungi known as Fusarium, Pythium and Rhizoctonia. Damping-off is most common in Douglas fir trees. It happens while they are in greenhouses or nurseries. Seedlings usually won’t germinate if they have the disease.8 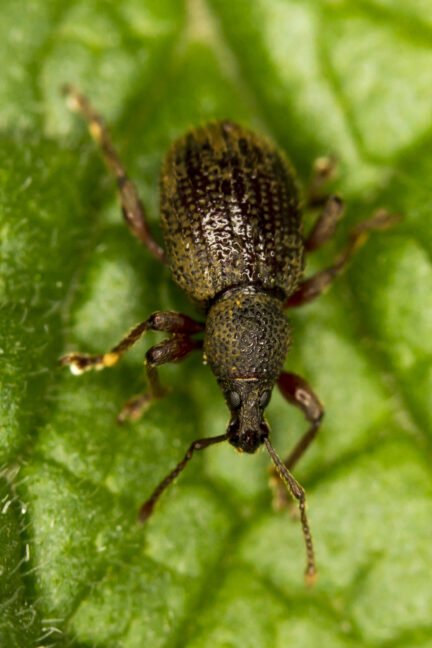 Christmas trees are used as decoration in homes during the winter holidays. They are often decorated with ornaments. Christmas tree branches can also be used for wreaths, swags, and other decor.

Image by Kgbo on Wikimedia Commons 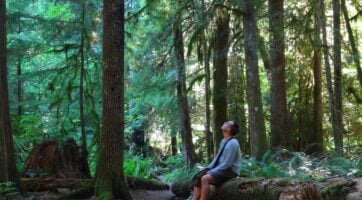 A machine to tightly bundle trees together with cord, wire, or netting.

A person or company who sells trees to other countries.

A simple organism, or living thing, that is neither a plant nor an animal. When there is more than one fungus they are called fungi.

To start or cause to start growth; sprout.

Remove the bark around a tree trunk.

A substance used to prevent or kill insect pests.

A knife with a wide heavy blade, used to cut crops.

A young plant that is raised from a seed.

To cut off with scissors or a tool like scissors.

A group of living things that can reproduce with one another but not with those of other groups.