Pumpkins are a great manipulative for math and science exploration. These activities are ideal to follow up on field trips and make the most of the natural connections between pumpkins and math and science.

Part I: Pumpkin Predictions & Measurements
Students will use pumpkins to make predictions and explore different ways to measure objects – weight, circumference, diameter and volume – then graph and record findings.
1. Divide your class into groups of 3-4 students. Provide each group with a pumpkin. (Pumpkins should be quite different from one another.)
2. Ask students to look around at the other pumpkins and predict which group has the largest pumpkin. Which one do they think weighs the most? Do they think the largest pumpkin will weigh the most? Will the smallest weigh the least? Students should record their predictions. These predictions and actual measurements can be recorded on a class-wide graph.
3. Students then weigh the pumpkins and compare findings with prediction. Consider: Weigh one pumpkin in front of the class before the students make predictions about their group’s pumpkin. This base knowledge can change predictions into estimations.
4. Repeat this prediction process for finding the circumference, radius, diameter, and height of students’ pumpkins. Note: To find the circumference, measure around the widest part of the pumpkin. Unlike perfect circles, pumpkins are, at-best flattened spheres, so these measuring techniques will likely not be 100% accurate.
5. Students record the actual measurements next to their predictions on the attached handout. Create a classroom graph based on these measurements. Do the findings match the predictions? What conclusions can students draw about the relationship between weight and circumference? Are there other relationships that can be made?
6. Challenges: a) Have students organize the classroom findings to show averages, mean and median using the pumpkin data. b) Demonstrate the water displacement method to measure the volume of an irregularly shaped object.
c) Show students how to find pi with the information they have gathered on the radius and circumference.

What’s Happening:
Why do the pumpkins float? People have been wondering why things float or sink for centuries. The
Law of Buoyancy, called Archimedes’ Principle, states that a body floating in a fluid is supported (or
buoyed up) by a force equal to the weight of the fluid it displaces.
In simpler terms for this experiment, a pumpkin will float if it displaces as much water as it weighs.
When a pumpkin is immersed in water it experiences a force known as the buoyancy force. This
force is equal to the weight of the water displaced by the pumpkin.
Here is another example: A lump of steel will sink because it is unable to displace water that equals
its weight. But steel of the same weight, shaped as a bowl, will float. This is because the weight gets
distributed over a larger area and the steel in this form is able to displace water equal to its weight.
As a result, a heavily laden ship floats because its total weight is exactly equal to the weight of the water it displaces. It is this
weight that exerts the buoyant force supporting the ship.

Test This Concept:
1)Take a piece of modeling clay and shape it into roughly a cubic centimeter ball. Next, put it in a glass of water to see if it
floats. It should sink. A cubic centimeter of water weighs 1 gram by definition. A gallon of water
weighs 8.34 pounds. So, in order to float, an item that weighs 1 gram must displace more than a cubic
centimeter of water. An item that weighs 8.34 pounds must displace more than a gallon of water to
float.
2) Challenge students to partner up and create a shape that will allow the piece of modeling clay to
float.
Note: If students flatten out the clay and make a boat shape using a flat bottom with a lip around the edge
it will float. Have students test their shape out once they complete it. Although the weight of the clay didn’t
change, the amount of water displaced did change.

Part III: Predicting & Counting Seeds
1. Use three different sized pumpkins for this activity. Begin by having students predict and record
which pumpkin, the largest or smallest, has the most seeds on their worksheet.
2. Next, slice the pumpkins in half lengthwise and then examine them. Have students examine the
size of the cavities, seed density, and how seeds are attached along the ribs.
3. Place a newspaper under the pumpkins. Have students scoop out the seeds, remove the seeds from the fleshy fiber and dry
them on a paper towel.
4. Students then count the seeds in each pumpkin. Chart the students’ predictions and the actual numbers. Are the seeds in
each pumpkin the same size or different? Do students notice any difference in the seeds of the small and large pumpkin?
5. Next, have students count the ribs on the middle-sized pumpkin. Based on what they observed in the small and large
pumpkin, have them predict how many seeds will be in the mid-sized pumpkin.
6. Cut the mid-sized pumpkin lengthwise and count the seeds. Were their predictions accurate? Did the larger pumpkins have
more seeds than the smaller ones? How many ribs did it have? Did ribs have an influence on the number of seeds?
Tasty Fun: Pumpkin seeds are tasty and highly nutritious snacks. They contain zinc and other important minerals. Save the
seeds from the pumpkins and roast them in an oven to make a classroom treat. Add in a little math by having the students
divide the pumpkin seeds by the number of students and determine how class members can get equal portions.
For Younger Grades: Pumpkins are ideal for discussing life cycles and sequencing. The book, The Pumpkin Circle and others
can be checked out from AITC’s Lending Library. 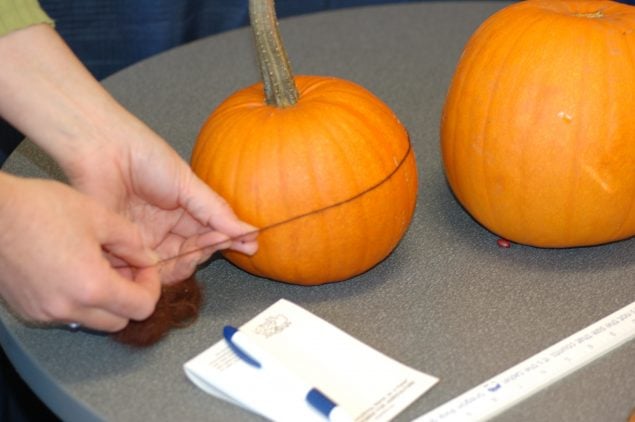